Plano Profile:Author Robert Rummel-Hudson moves his family to Plano for his special-needs daughter 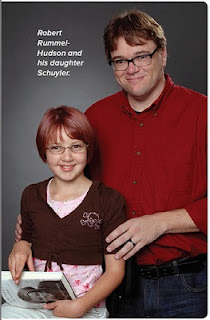 Schuyler is a princess whose story is unlike most, and unlike most fairy tales, the monster in her story is one she cannot see or touch or even run away from. It is Bilateral Perisylvian Polymicrogyria (BPP), a rare neurological disorder that affects her speech, and after five years of doctors visits and one alarming parent-teacher conference at a school in Austin, Robert Rummel-Hudson and his wife Julie moved to Plano to try to slay the beast.

Published by St. Martin's Press (New York), Schuyler's Monster: A Father's Journey with His Wordless Daughter cover's Schuyler's first seven years battling BPP.  "The book focuses on the things that Schuyler taught me," said Robert, "like to believe in my parental instinct, to trust my guy.  There were many times when she received a misdiagnosis that didn't feel right."

Schuyler's original diagnosis was an Autism Spectrum Disorder, but Robert and Julie questioned the experts at Yale Child Study Center, and sure enough, an MRI revealed the true story: Schuyler was one of 40 BPP cases in the world.

For the world to understand this 3-and-a-half-year-old, Schuyler would need an Alternative Augmentative Communication (AAC) Device.  They were around $7,500 and through an online fundraising campaign, Schuyler got her "voice."  Now all she needed was a school that would back Assistive Technology.

Schuyler was attending a school in Austin, but a parent-teacher conference revealed that an impatient teacher was turning off Schuyler's device.  Once again, she was left voiceless.

Finally, a friend told Robert and Julie that the Plano Independent School District had an Assistive Technology Team (ATT) that supported speech devices in the classroom.  They contacted Sherry Haeusler, head of the ATT, and she invited them to Plano.

Julie was nervous, like any mom in her situation would be, and told Robert, “I feel like we’re chasing something we’re never going to catch.”

But upon their visit, the husband-and-wife team learned that Schuyler could be placed in a classroom exclusively for users of AAC devices. Plano’s AAC program at Gulledge Elementary School would give Schuyler a sense of community.

“What’s your favorite thing to do at school?” her dad asked.

“Seriously?” both of her parents laughed.

“You’re giving away all your secrets, aren’t you?” Julie nudged her daughter.

Julie is a public relations specialist for Barnes and Noble (on 15th Street and Alma), and Robert is the Director of Communications for the School of Architecture at UT Arlington, his alma mater. Robert majored in music at UTA, but switched to English with no notion of becoming a published author.

Excerpt, from the Prologue

The first time we met Schuyler’s monster, it lay waiting to pounce, not from behind a rock or from the mouth of a cave, but peeking out from between the lab coats of two nervous and sad-faced doctors.

When we stepped into Dr. Simon’s office, we only expected to see Schuyler’s pediatrician. Instead we found her waiting with Dr. Ment from the Yale University Medical School’s Department of Neurology. When we saw the sheet of MRI photos already in place on the light board, our world stopped. The doctors looked at us as if they wanted to be anywhere but in that office, and Julie and I looked back at them with the slow realization that we were about to get kicked in the teeth. We all stood there for a moment, none of us sure what to do.

No one except Schuyler, of course.

She’d been to doctors’ offices before. She was only three years old, looking for all the world like a perfectly normal, pretty little girl. Friends and strangers alike often pointed out that she was a dead ringer for a young Drew Barrymore. Schuyler wasn’t like most little girls, however. She couldn’t articulate a single word.


No degree can fully prepare a parent to care for a special-needs child. What continues to be a challenge for Robert, he said, is knowing when to step back and let Schuyler be Schuyler. “It’s hard not to want to do everything for her. I want to build this safe space for her.”

The author wrote Schuyler’s Monster to spell out his love in a wordless world.  “My editor jokingly asked me if Schuyler was going to write a rebuttal one day,” he said and added, “I wanted to write something for her in the hopes that one day she’d understand, even though I was fumbling in the dark a lot, everything Julie and I have done is out of love for her, to make things better for her.”

Robert admires Schuyler’s compassion the most.  When she started school last year, he and Julie received a phone call about one of her wheelchair-bound classmates who was getting picked on. “The teacher said, ‘The second thing Schuyler did was inform a teacher … but the first thing she did was knock this kid in the dirt.’”

Robert laughed and admitted he was proud. “I remember high school. I was a fat kid in band and got picked on. Having a disability is a whole different minefield. I think her compassion and independence is going to serve her in the future.”

Julie added, “I admire her tenacity. She’s doing soccer now for the Miracle League in Frisco and she just jumped in there and figured things out.”

Schuyler’s tenacity showed through when she was learning how to write her name. Robert and Julie were told that she would never be able to write. “Now, every time I have a book signing, she’s there signing books with me,” said Robert, “and every time she signs a book, it’s like this little personal victory.”

He added, “There was a list of things she would ‘never’ be able to do. Since she’s come to Plano, she’s been crossing that list off one item at a time.”

Robert and Schuyler will be signing books at the Prestonwood Barnes and Noble at 1 p.m. on Saturday, November 8. Then, they’re off to the American Speech and Hearing Association in Chicago as guests of Prentke Romich, the company that makes Schuyler’s device. For more information on Schuyler’s Monster, visit schuylersmonster.com.