Robert Rummel-Hudson lives in Plano with his wife Julie, an events coordinator for Barnes & Noble, and his daughter, Schuyler, 8, who suffers from a rare brain malformation called bilateral perisylvian polymicrogyria or PMG. Her condition has left her unable to speak except through some sign language and the use of an electronic speech device. Robert is the author of Schuyler’s Monster: A Father’s Journey with His Wordless Daughter (St. Martin’s Press, 2008).

All About Robert
Nicknames for his daughter: Stinkerbell, Monkey Queen, Scout, Sky-Dogg
What he’s reading: Janeology by Karen Harrington
Favorite guys’ night out: Symphony or opera concert, followed by hours at someplace open late to pick it apart.
No. 1 parenting rule: No spanking, ever.
Most frequently broken man law: Watching chicky TV with Julie.
Autograph he’d pay to get: Christopher Walken (if it came with a few dance lessons).
Favorite movie he’s afraid to admit he likes: Stealing Home
Dream car: Mazda RX-8
What he really drives: 1999 VW Beetle, 120,000 miles, not long for this world.
Take-out guru or grill master: Take out, definitely. 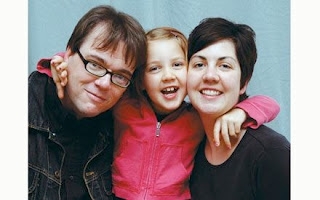 6am The alarm goes off to the sounds of Bach on classical guitar. This should be soothing, but we hit the snooze button anyway.

6:08am The alarm doesn’t understand and tries again. Julie and I get up, satisfied that we fought The Man for an extra eight minutes of sleep. We drag ourselves out of bed. Julie takes the dogs out for their morning walk, while I feed them and check my email.

6:20am I wake up Schuyler, as usual by standing next to the ladder to her loft bed and telling her that her ride is leaving in 5… 4… 3… 2… She always climbs on my shoulders by the time I get to 1. We take a wild ride through the apartment before I dump her onto our bed.

6:30am After her morning bathroom visit, Schuyler sits down for a little television and breakfast, usually some chocolate-chip mini muffins and an episode of Grossology on Discovery Kids. Mess with this ritual at your own peril.

6:50am Quickly, during a commercial break, we dress Schuyler and try to fix her hair, which usually looks like the back of a chicken in the morning.

7am This is the most important part of the morning. When Kenny the Shark comes on, we sing the theme song together. Schuyler knows the words and the tune, and although her words are unintelligible, we all belt it out just the same. “Kenny, Kenny the shark! I want Kenny, Kenny the Shaaaark!”

7:05am We finish packing Schuyler’s backpack for the day, including her lunch, her homework, and her Vantage, the augmentative speech device that she uses to communicate, which has been charging all night. When fully packed, the backpack is daunting.

7:10am Schuyler’s bus arrives. She puts on her backpack, hunkering down a little under its weight and runs halfway to the bus before responding to my pleas and returning for one last kiss. She climbs onto the bus and waves cheerfully as it drives away. She suffers from no separation anxiety, which is OK. I have enough for the both of us.

7:11am I go back to bed. My days are spent in one of two ways, at least lately. Three days a week, I drive to Arlington, where I work as the communications director for the School of Architecture at UT Arlington. This mostly involves writing press releases and handling the content for the Web site. It’s a great job, and I love it enough not to mind the commute, but it’s not exactly fascinating to read about. On the days I don’t go to Arlington, I am free to write, or, like today, to attend meetings and talk about writing. Which is perhaps about as interesting as talking about architecture, but at least with writing, I don’t have to pretend like I know what I’m talking about.

10:30am I meet a novelist friend of mine for coffee. Her book came out shortly after mine, so we share marketing ideas and our hopes and fears now that our big dream has come true. “What next?” is a common topic.

12pm I go to lunch with two producers from a local film production company. They want to discuss the possibility of making a film based on my book. It all seems so distant from our old lives, from when we were struggling to find the answers to our daughter’s mysteries and her nameless affliction, the one that robbed her of her words. It’s fascinating and wonderfully surreal, this new world of ours, but we’re never very far away from the one in which Schuyler and her condition are breaking our hearts.

2:35pm Drive home and spend the rest of the afternoon writing.

6:10pm Julie comes home with Schuyler, who rushes in the door and gives me the same full-contact hug and sloppy wet kiss that she gives me every evening. She can’t speak, not like you and me, but the simple truth is that at times like this, we don’t need words.

6:30pm We pack up Schuyler’s device and go to dinner. A few days ago, we attended a social event at our apartment complex and won a $25 gift card to a local restaurant, so tonight we leave the fridge closed and treat ourselves. As usual, Schuyler orders her own food, using her speech device. We do her homework with her before our food arrives. Afterwards, on our way out to the car, we see a small rabbit eating grass beside the building in the twilight. He lets us get very close to him before he scurries off. “I want one!” says Schuyler.

8:10pm When we get home, Schuyler and I share the giant slice of cheesecake that the film producers sent home for her at lunch. She fights with a strawberry that is much too large for her, but she wins in the end. Sloppily, but a win all the same.

8:30pm She changes into her pajamas and brushes her teeth. She dawdles as long as she can until we come in and light a fire under her. She distributes hugs and kisses and runs to her bed, climbing the ladder like a monkey and gathering her Groovy Girls and her stuffed animals, the ones who keep watch over her every night. As we turn out the lights, she is still talking to them all, murmuring softly in her special, Martian language that I always regret not being able to understand.

8:50pm Julie and I relax at last, catching up on the day’s events. We talk at length about my lunch meeting and what we want to see from the film discussions. With Schuyler and the book, it is always a balance we strive for, between the attention that can help her and all the kids like her in the world, and the privacy and the normal life that she deserves and which we are committed to providing for her. It feels like a good day, one of the many that we finally get after all those years of struggling. We don’t take any of them for granted.