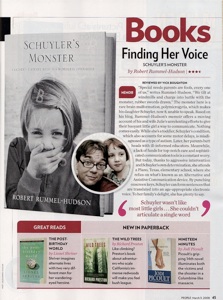 MEMOIR  “Special needs parents are fools, every one of us,” writes Rummel-Hudson.  “We tilt at windmills and charge into battle with the monster, rubber swords drawn.”  The monster here is a rare brain malformation, polymicrogyria, which makes his daughter Schuyler, now 8, unable to speak.  Based on his blog, Rummel-Hudson’s memoir offers a moving account of his and wife Julie’s unrelenting efforts to give their buoyant little girl a way to communicate.  Nothing comes easily.  While she’s a toddler, Schuyler’s condition, which also accounts for some motor delays, is misdiagnosed as a type of autism.  Later, her parents butt heads with ill-informed educators.  Meanwhile, a lack of funds for top-notch care and sophisticated communications tools is a constant worry.  But today, thanks to aggressive intervention and Schuyler’s own determination, she attends a Plano, Texas, elementary school, where she relies on what’s known as an Alternative and Assistive Communication device.  By punching onscreen keys, Schuyler can form sentences that are translated into an age-appropriate electronic voice.  To her family’s delight, she has plenty to say.