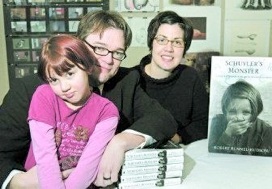 The sunlight streaming through the top windows in the Gallery at the School of Architecture at the University of Texas at Arlington cast a ray around a beautiful 8-year-old girl with flaming red hair.

Schuyler spontaneously flung out her arms and spun in circles Thursday while her mom, Julie, talked with guests, and her father, Robert Rummel-Hudson, signed copies of his first book.

His hardback, Schuyler’s Monster: A Father’s Journey with His Wordless Daughter, gives a voice not only to his enchanting daughter but also to any parent who has a child with special needs.

The complicated brain-malformation syndrome affects each patient differently, depending on where it occurs in the brain.

Although she does talk in what her father describes as “Martian,” Schuyler’s main source of communication is through a portable touch-screen device with programmed word keys that allow her to express herself.

Not that she has any problems -- either in her class for children who use the device, her second-grade classes in Plano or at the book signing.

She cheerfully signed her name on the books, too, scribbling her name over her father’s until he asked her to sign in her own space.

There have been lots of opportunities lately to sign her name.

The book was released Feb. 19, and since then the author has been on a mini whirlwind promotion tour while taking some time off from work.

Rummel-Hudson, a former UT-Arlington student, serves as communications director for the university’s School of Architecture.

He was in New York after the release, back in the North Texas area for book signing events, television appearances and radio spots and will be in South Texas next week.

Schuyler has appeared at some book signing events.

His article, “Love Beyond Words,” appears in the February issue of Good Housekeeping magazine; and People magazine has given his book 3.5 out of 4 stars.

Rummel-Hudson said the press junket “has been insane. It feels like it’s someone else’s life right now.”

The author has been writing online, a typically singular existence, for many years.

His book emerged after he received numerous e-mails from parents who had children with special needs and “a lot of people out there who were a little bit lost.”

“I wanted to leave something for Schuyler,” he said. “I want her to know what we went through to help her. It’s a love letter, really. Of course when she’s 16, she’ll probably be mortified by all the attention. But she’s eating this up right now.”

As she danced around the room last week, Schuyler faced no monsters -- either real or imagined.

With help from her father, Schuyler has found her voice.