In Schuyler's Monster, a father discovers his daughter’s personality long before she can express it in words 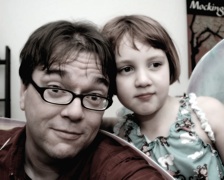 One of my favorite things is to lock eyes with a child. So often their gaze is wholly open, simultaneously soft and intense, free of those gauzy layers of self-defense we acquire as the world kicks us around a little. Adults usually look away within a few seconds, singed by the too-frank exchange. But kids will look right back at you with curiosity, mirth, pride, fright, anger, or love. They haven't yet learned to stop before they reveal too much.

Robert Rummel-Hudson struggled to figure out why his daugher Schuyler, now 9, never learned to speak.

My kids surprise me all the time, but there has never been a moment when I have doubted they are exactly the fully formed soul I saw in their newborn eyes. Obviously, upon looking into my youngest's eyes at birth, I couldn't know he would love baby animals or be a fusspot about his socks. But I knew he wasn't a social creature like his brother or father. Much of his real life would take place in his imagination.

I never expected that babies arrived so completely, totally — well, them. Before I had mine, I thought a parent's job was to try to influence a child's unfurling personality. To correct and adjust and refine until there were as few rough edges as possible.

Parents do help shape character, yes. But a decade into the adventure, I have come to believe that a much more important task is being the anointed keeper of that inborn kernel of personhood, the full-grown, car-driving, credit-card-wielding advocate for its potential. I don't mean trying to smooth every speed-bump from your babe's road of life, I mean holding that kernel uppermost in your mind's eye.

I spent the weekend with Schuyler's Monster, a book written by a father who did just that to remarkable effect. Robert Rummel-Hudson's memoir is ostensibly about his quest to get help for his daughter, Schuyler (SKY-ler), who was born with a brain deformity — her monster. But it's really a story about a man who trusts his intimate knowledge of his child's spirit more than well-meaning experts who would sell her short.

Schuyler peers out from the book's cover with an impish grin, but one that's only discernable from her crinkled eyes because one hand covers her mouth. She can babble, but a rare genetic disorder has left her wordless. Still, her eyes say speak volumes: she's up to mischief, and she's inviting company. When we meet Rummel-Hudson and his wife, Julie, they're both working as managers for Barnes & Noble. Julie is pregnant and Robert is filled with self-doubt: "My own models for fatherhood weren't very promising."

Schuyler's arrival is uneventful. But when she's still not speaking at 18 months, it's clear there's something wrong. Supposed experts eventually say she has a form of autism, but Robert knows this is wrong. Schuyler is quite social and, the Rummel-Hudsons alone are convinced, very bright. But the family is also broke, so pursuing better diagnoses takes Herculean effort.

Throughout, Robert struggles against feeling responsible for Schuyler's state. His helplessness tumbles into depression, which snowballs into a marital crisis. "I was convinced that if given a choice, Schuyler would ultimately be better off with a Ghost Father, one whose imaginary attributes she could invent and build as needed through the years," he writes. "Ghost Father would be infinitely preferable to Living Failure Dad, with all my faults and inadequacies there for the world to see."

When answers finally do come, it is in part because of Robert's blog about the family's efforts on Schuyler's behalf. At one point in the saga, the family is living in Austin, Texas, but wants to take Schuyler to a Chicago specialist. When Robert blogs that their two retail paychecks won't cover the trip his e-mail inbox starts to fill up with PayPal donations from people invested in the little girl. Schuyler's ultimate diagnosis: polymicrogyria, a very rare congenital syndrome in which, essentially, the brain has too many wrinkles. She will never talk.

It's devastating news, but again her father refuses to accept the bleak future predicted for her. Through a strange bit of serendipity, Robert learns of two companies that manufacture alternative and augmentative communication devices — essentially tiny laptops with cascading touch-screen picture menus and synthesized voices that enable users to "speak."

Eureka? Not hardly. The Rummel-Hudsons were mired in the fresh hell that is the special ed system, whose experts had their own thoughts. Schuyler was not smart enough to operate the machine, they opined; it wasn't worth trying. Again, readers of Robert's blog ponied up the $10,000 it would cost to prove them wrong.

And wrong they were. Schuyler mastered the gizmo in a weekend, only to unleash one of the most heartbreaking chapters of the entire saga. Confronted with a little girl who was suddenly able to make herself understood, the teachers who doubted she would live up to the technology decided Schuyler's new voice was potentially disruptive and hit the mute button.

"In the end, stripped of her device and her support and even her basic sign language, standing alone against a mean girl or a hard world and armed with nothing more than her will, her sense of justice and her animal howl, Schuyler nevertheless knew that, monster or no, she still had a right to move through the world on her own terms," Rummel-Hudson writes. "She was going to be okay. She was always going to be okay."

There are plenty of miracles large and small in this slim memoir. But to circle back to the beginning, to the eyes as gateway to the soul, the most amazing element of Rummel-Hudson's story is Schuyler herself. "Schuyler knew she was different, although I couldn't really tell you when that happened," her father notes. "More clear was how she wasn't afraid of that difference, not like I was. She behaved like a tourist from some foreign land, trying to make herself understood. She became frustrated occasionally, but not nearly as often as you might expect. Mostly, Schuyler seemed amused, as if the rest of us were engaging in some stupid, jabbery behavior when really, we would all be much happier with some hand signs and excited vowels and a good, loud laugh."

Somewhere in the process of advocating for his daughter's undaunted spirit, Robert comes to believe in himself as a father. Schuyler's Monster paints a haunting picture of the soul's need to be known, as well as the painful way in which becoming a parent forces one to recognize one's weaknesses and limitations.

In my house, no one is ever wordless, which can drive a fundamentally introverted mother to tears sometimes. Sometimes our evenings end with frayed nerves. But sometimes, when I'm not too tired and I can keep my own concerns in perspective, I can hear through the chatter. What I hear is exuberance, the polishing of those brilliant kernels. At the end of the night, I'm still relieved to leave the wee folk to their stuffed animals and their nightlights. But I'm also grateful to be reminded that sometimes, my troubles are also my joy.