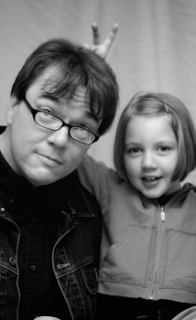 It has been eight and a half years since I looked into my newborn daughter’s eyes and thanked God for giving me a perfect child.

It has been seven years since Schuyler’s pediatrician first asked us if she was making any attempts to speak.

It has been five years since the fateful day that Schuyler’s pediatrician and a neurologist sat us down and told us about the monster that had been living in Schuyler's head, a rare brain malformation called polymicrogyria.  They explained what further effects this monster would have on our baby girl, about the seizures she might have one day and the possible swallowing disorders and the risk of mental retardation, and most of all the spoken words that would never come.

It’s been five years since I offered up the only prayer I ever truly sent up to God, to take Schuyler’s affliction away from her and give it to me.  Take my voice from me, and give her the one she lacked.  God said no, of course, and so it has probably been five years as well since I lost my faith.

The idea of the perfect child is both a little shameful and probably inevitable, no matter who you are or what obstacles and triumphs you face as a parent.  Most of us say that we will accept our child and be proud of them no matter what, and the thing is, we really mean it.  And yet I can’t imagine there’s a one of us who doesn’t carry the secret narrative in our heads, the one of our little valedictorian or Nobel prize winner, thanking us from the podium.  We do it because we carry hope for our kids, hope for them to achieve more than we ever did, and so by extension carry our own lives and our own possibilities beyond our years.

Life with any child is a drawn out process of painfully and incrementally letting go of that perfect child narrative.  It’s more acute when your child develops into one that is, for whatever reason, “different.”  For the parent of a newly diagnosed child with a disability, that disengagement is sudden, and the pain sharp.  It is nothing less than a grieving process, mourning the loss of a child who never existed and most likely was unrealistic all along, but who nevertheless is missed just as surely as if he or she had lived and died.

What we are left with is a child who exists, with all her flaws and differences, as a total and complete, and complex, human being.  The idea of “perfect” is doomed to begin with, depending as it does on our own subjective ideas of what constitutes a flaw in the first place.  Our children are who they are, and what we might forget (but absolutely should not, ever) is that the measure of their quality is not in their flaws, but rather in how they confront them.  Children with disabilities do this in ways that are grand and obvious, and we their parents celebrate them largely and proudly.  Some of us even write books about them.

But every child works to overcome their differences, and their fears, and even our unreasonable expectations of them.  It is in that work, and in the exercising of their character made strong like muscles, that our children grow.  It is in that way that they ultimately become perfect, not because they aren’t flawed, but because they are.  They are flawed and they are loved, and they are becoming people who will one day astound us, if we only give them the chance.

It has been eight and a half years since Schuyler began her journey toward perfection.  Like the rest of us, she’ll never achieve it, and yet in all the ways that count, she’s there already.

Robert Rummel-Hudson is the author of Schuyler’s Monster: A Father’s Journey with His Wordless Daughter (St. Martin’s Press, 2008).  He lives with his family in Plano, Texas, where his daughter Schuyler attends a special class for AAC users at Gulledge Elementary.