“To Have and to Hold” by Robert Rummel-Hudson (March 2008, Wondertime) is an unvarnished look at a marriage severely tested. Rob and Julie’s daughter Schuyler (now 8) was born with an extremely rare brain malformation that leaves her completely and permanently unable to speak. (She now communicates via a computerized speech device.)

Rob’s new book, Schuyler’s Monster: A Father’s Journey with His Wordless Daughter (February 2008, St. Martin’s Press), gives a fuller picture of how this family is prevailing against the odds. For an update on Rob, Julie, and Schuyler, read on.

Wondertime: We were struck by how honest you were about your marriage.

You know, people who are in a situation like ours feel like they’re all alone. They feel like they’ve failed, because they have these problems. So it was pretty important to me to put that out there and Julie felt the same way. From a writer’s perspective, I think it’s a better story, because none of us are superheroes. Even when we know better, we make bad decisions. That’s what being a human is about. 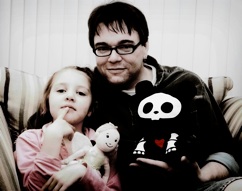 Wondertime: I’ve come across the statistic that 85 percent of parents of special needs kids split up. I haven’t found any research that backs it up, but a lot of people say it rings true with their experience. Is that true for you?

Oh, absolutely, absolutely. Our society gives us this narrative of how your family is supposed to be, and for parents who have children who don’t fall within the societal idea of what’s normal, those narratives fall apart pretty quickly. One of the things Julie and I learned, for instance, was that infidelity was not the worst thing that could happen. Given the choice between making mistakes and moving on, or splitting up and trying to be a parent to Schuyler from two different households — it wasn’t just difficult to imagine, it was impossible.

Maybe if you didn’t have the bond of a special needs child it might be easier to give up — but in not giving up you find things that maybe you didn’t know were there between the two of you. I know that Julie and I, now, we’re stronger than we’ve ever been.

Wondertime: How do you relate to other parents with special needs children?

A sort of intimacy is already granted. We have these meetings, and when we’re talking no one’s trying to convince us that everything’s okay. You just start off conversations with, “Well, this is what sucks this week.” And no one’s afraid of looking like they don’t care about their child. We don’t have time to be pretty.

Also, and I’ve really been surprised by this, there doesn’t seem to be a lot of talk like, “You think you’ve got it bad? Here’s what my kid has.” I think special needs parents look at other parents and their situations, and they see [right] to the pain that’s there, and the uncertainty.

Wondertime: I want to ask about Schuyler. What are your hopes for her?

We’ve always had the hope — and it’s strange how it’s turned into a realistic hope, almost an expectation now — that she would be able to graduate from high school. Before she had her device, before she was in a school situation that worked for her, the teachers and other specialists would be like, “Oh, that’s nice. That’s good to have those hopes. Strong little camper.” It was a refrigerator art approach to our goals.

But when we got her into a good school and into a class that was exactly appropriate for her, all of a sudden that expectation was too low! I remember the first time we met with this school, and they asked the same question, “What would you like to see for Schuyler?” and we brought up graduating from high school, and they looked at us like, well, yeah. And? Beyond that? And I’d never thought beyond that. Neither had Julie.

Wondertime: Well, you’d been discouraged from thinking that way.

Yeah. But it’s funny with Schuyler. If there’s been one consistent thing with her, it’s that she has defied expectations. Including ours. The things she takes interest in always surprise me. She started writing in the past few months.

Wondertime: She comes by that honestly.

Yeah! Well, I’m not going to pretend like I’m not excited by that. Although, it’s funny, my literary agent asked me if Schuyler was going to write a rebuttal.

I was like, if she does, I’m fine with that. These days she’ll say something on her device, and then she will get out her big pad of paper that she carries with her everywhere now (she really is after my own heart) and she will very meticulously handwrite whatever it was that she had on her screen.
She’ll write something and bring it to us, and when that happens, you get this big lump in your throat. Maybe it’s “I want cookies.” Or “Shut up, Daddy.” But whatever it is, it’s not the words, it’s the fact that I’m looking at words that Schuyler wrote. There’s nothing like that in the world for me.

So, going back to your question: I guess what I hope is that whatever she chooses to do, the limitations are ones that she sets, not because of her disability but because of her level of interest. Whatever she does, though, I hope it’s close to home. The idea of Schuyler going away somewhere makes me want to cry a little bit.

Wondertime: I think all parents can relate to that feeling.

You know the nice thing about that? That it’s a heartbreak that every parent goes through. It has nothing to do with her disability. And every time she breaks my heart in a neurotypical way, it’s like, this is awful and wonderful at the same time.

Wondertime: You first heard about us because of our series on Jimmy Foard, right?

Oh, I just loved that series. It resonated so strongly with us.

Wondertime: Do you think that was partly because Jimmy also used a speech device?

Initially it was. It was the hook for us, but I think what held my attention the most was just watching Michelle Foard work so hard for their kid even though she had so few answers — she had so little to go on other than instinct — and watching as she found the right people to help her and to help her kid. Because I felt like that’s what it’s like for me. And then I thought, that must be what it’s like for everybody. Everybody thinks they’re alone, they’re on their little island, and it turns out ...

I actually don’t know that I would have written the book if not for that story. It was that important to us.

Wondertime: How did you end up enrolling Schuyler in the school system in Plano, Texas?

A friend of ours lived there and told us to check out the Plano schools, they have an assistive technology team. So we visited the school, and we discovered that they were beginning a pilot program, a class consisting of kids who were using these speech devices. It was as if somebody decided to make a school just for our kid, you know?

Now she’s surrounded by kids with various disabilities, all of them using devices. Schuyler has a best friend in her class, and it’s funny to watch them out together with other kids in the school, neurotypical kids. They will sort of shun these other kids. They’ve turned into little ... almost like little snobs with their devices! I certainly don’t want her to grow up to be a little princess, but at the same time, a little bit is nice — to watch her look at these kids like, “Ah, you just talk with your mouths, you don’t use a computer, so whatever.”